With respect to model diagnostics, please have a look at the post on Simple Linear Regression, because what I wrote there on e.g. the interpretation of the diagnostic plots also applies to Multiple Regression.
I will, nonetheless, discuss some issues which are specific to Multiple Regression (e.g. multicollinearity) as they are not applicable for Simple Linear Regression.
I am often asked about the minimal sample size required for regression analysis and I typically recommend 25 cases per group. I only provide this value because I am annoyed by that question as the required sample size depends on the size of the effect you want to detect and the number of predictors in your model: if you have many predictors and want to detect even small effects, then your minimum sample size would something like 600 cases. However, Field, Miles & Field (2012:273-274) provide rules of thumb for minimal sample sizes in regression analyses (k = number of predictors in the model; categorical predictors with more than 2 levels should be transformed into dummy variables):

You will see below that I wrote a function which checks if the minimal sample size is sufficient.

Regarding model fitting procedures, will only touch on them here and I will used stepwise step-down model selection based on AIC (Akaike information criterion). There are several methods one can use to fit the model (forced entry, stepwise, hierarchical) and even within these approaches there are subroutines and a discussion of these different procedures is beyond the scope of this post. I will, however, write another post which is dedicated exclusively to model fitting procedures.

We are going to examine whether the money spent on presents by guys depends attraction and then relationship status of the girls that the presents are given to. 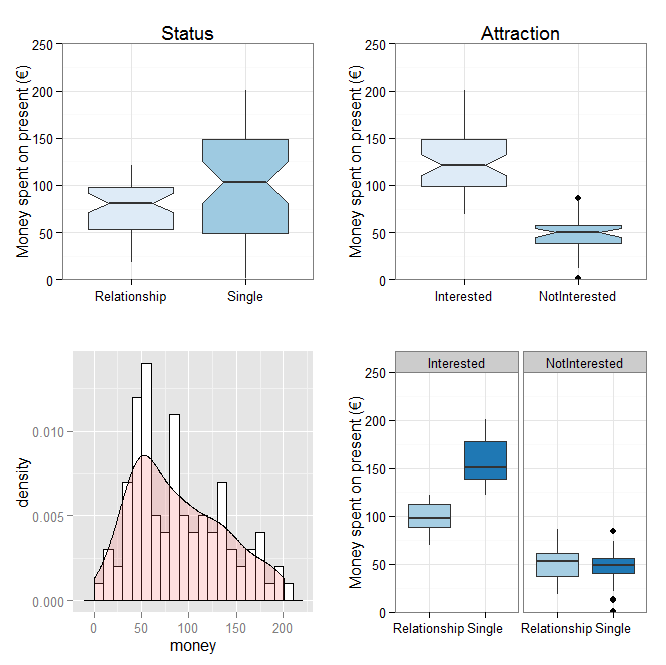 Ok, so what does all this mean?

The first object reported by the summary function is the Call, i.e. you formula. Next, the summary contains an overview of the residuals, i.e. a summary of the distribution of the difference between the values predicted by the model and the observed values.
Next comes the most interesting thing: a table with the parameters for our predictors (in fact, these are the parameters for our fixed effects – we will look at what the difference between fixed and random effects in another post). We will examine that table in more detail later on.

All main effects and the interaction between status and attraction affect money significantly. But what does this mean and how should you interpret this?
First of all: if there is a significant interaction, you should not interpret the main effects which are involved in the interaction. And if you do not have significant interactions, you should be aware of the fact that the main effect reflects a bivariate statistic (!), i.e. the coefficients of the predictors reflect the correlation between the dependent variable and the predictor if the other predictor has a value of 0. 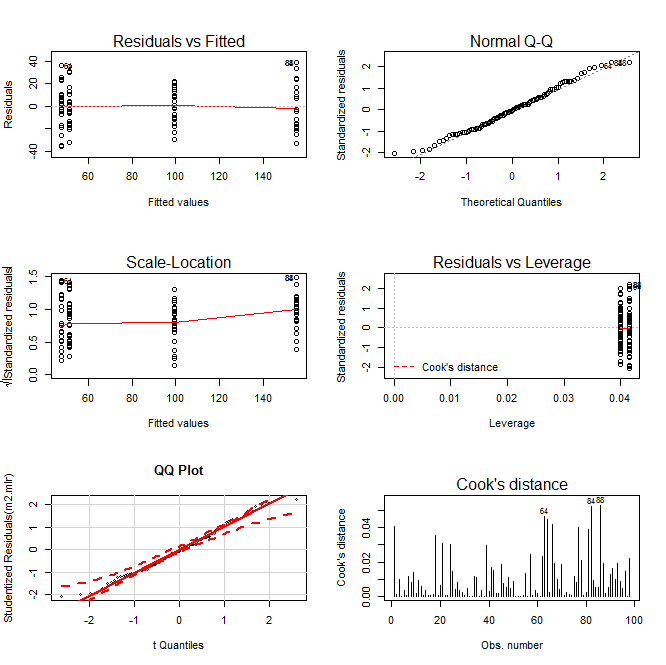 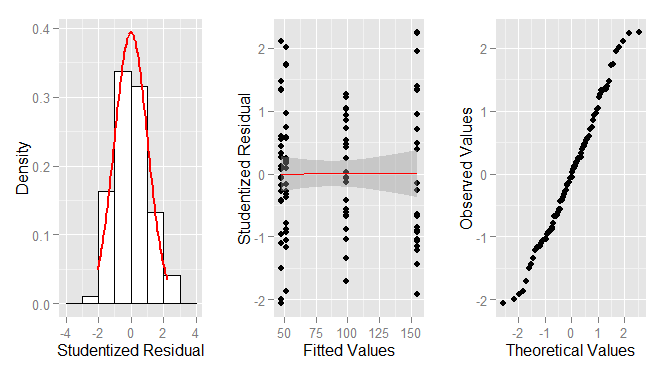 You would report these results in a table like the one below.

If you have to report the regression model in prose, it would read something like this:
(If there are significant interactions, you should not interpret the main effects involved in these interactions! I only do so for because I want to show how a model report could look like).
A multiple regression analysis was fitted to the data in a step-wise step down procedure using AIC (Akaike’s Information Criterion) to arrive at the final minimal adequate model. During model diagnostics 2 data points were identified as outliers and as a result removed from the data. Further visual inspection of diagnostic plots and data driven methods did not suggest further problems. The final multiple regression model was based on 98 data points and correlated significantly with the data (R2: .857, F-statistic (3, 94): 154.4, AIC: 850.4, p < .001***). The minimal adequate model contained both attraction and status as significant main effects. The status of money receivers correlates significantly with the amount of money they received (SE: 5.14, t: 10.87, p < .001***). This shows that if the person receiving the money is single, they receive 55,85 Euro more money compared to persons who are in a relationship; these receive 99.15 Euro (given that they are not interested in the receiver). Attraction also correlates significantly with the money one receives (SE: 5.09, t: -9.37, p < .001***). This shows that if the person giving the money is not attracted to the person receiving the money, they will spend -47.66 Euro less than they do if they are interested in the person (given that the receiver is in a relationship). The final minimal adequate model identified a significant interaction between status and attraction (SE: 7.27, t-value: -8.18, p < .001***): if the receiver is single but the donor is not attracted to the receiver, the donor will spend 59,46 Euro less on that person than he would if he were interested in the single person (cf. Figure 1 above). The effect size is substantial (standardized β: 0.9962) and confirms that if the subject increases calorie intake by one standard deviation (10.4kcal) the person will gain one standard deviation in weight (2308g). References