In this post I want to exemplify how to implement a simple Linear Regression in R (the R code is based on Field, Miles, and Field 2012).

Regression models are used to evaluate if one, or more predictors (or independent variables) correlate significantly with a dependent or outcome variable. The underlying logic is almost exactly identical to ANOVA (Analysis of Variance) designs, but in linguistics regression models have traditionally been used in analyses based on corpus data (e.g. sociolinguistic studies) while ANOVAs were the method of choice in psycholinguistics. The field-specific bias is, however, historical and cultural rather than caused by design specific advantages.

The r code below is used to a) extract and process the data; b) visualize the data; c) perform the regression analysis, and d) test if the assumptions, that a linear regression is based on, are met. 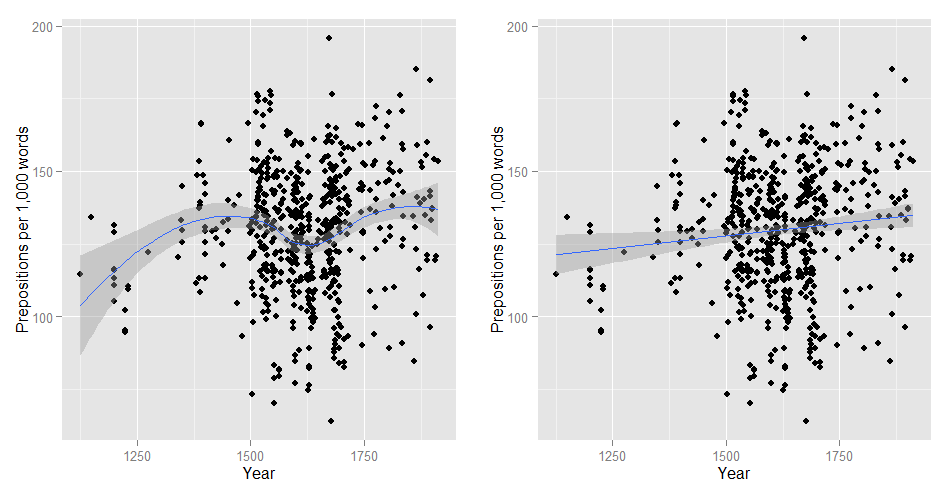 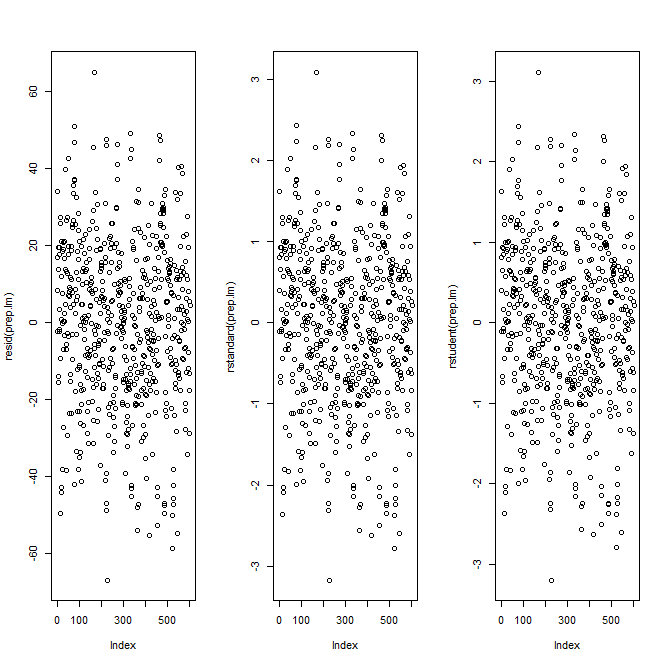 The left plot shows the residuals of the model (the difference between the observed and the predicted value). A shortcoming of this plot is that the residuals are not standardized, i.e. we cannot compare them to residuals from another regression model. To overcome this shortcoming, we have a look at standardized residuals which are residuals divided by their standard deviation (see the plot in the middle). This way, residuals are converted into standardized residuals, but more importantly, they now represent z-scores and we can use the z-distribution to determine which points are problematic. Here are three rules of thumb for diagnosing regression models based on residuals (see Field, Miles & Field (2012:268-269):

The plot on then right shows the studentized residuals, i.e. the adjusted predicted value of each point is divided by the standard error of the residuals. This way, we can use the Student’s t-distribution to diagnose our model. Adjusted predicted values are also residuals, but a specific kind of residual: a model is calculated without one data point, then, this model is used to predict the data point. The difference between the observed data point and the point predicted by the model without this point is called the adjusted predicted value. In summary, studentized residuals are very helpful to detect influential data points.
The plots show that there are two potentially problematic cases – the dots which are at the very top and at the very bottom. These two data points stand apart from the other points and are thus probably outliers. We will check later if they need to be removed. 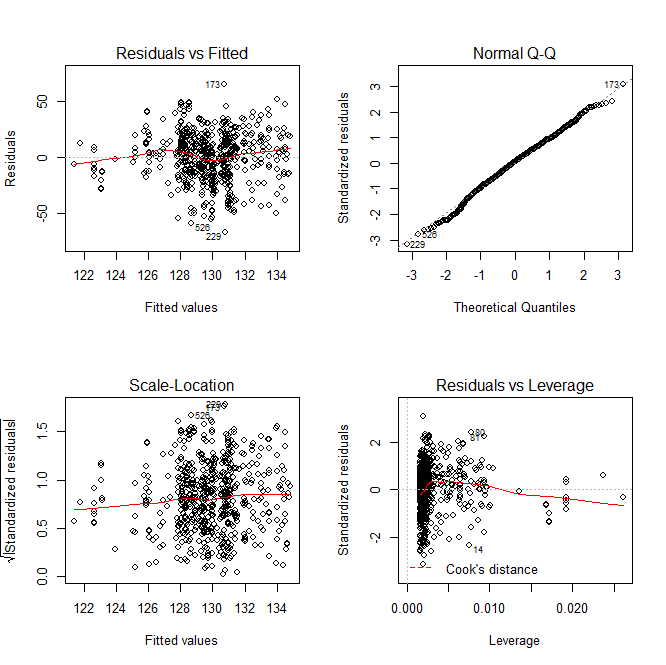 The diagnostic plots look very good – but what does this mean? (I will go more into detail in the post on Multiple Linear Regression)

Well, the upper left plot is useful for a) finding outliers, or b) finding correlations between residuals and fitted values: if there were a noticeable trend visible in the line or the data points (e.g. an upward, downward, or zig-zag trend in the line), we would have a problem and would have to delete data points.

The lower right plot is useful for detecting leverage, i.e. points that over-proportionally influence the regression model (this should not be the case as in simple linear regression all data points have the same weight). If there are points that have a high leverage, you should try a) to use a robust linear regression (which assigns different weights to the data points or b) delete the data points as outliers. This plot also shows Cook’s distance which is a measure that captures how much the regression would change if the point I question was deleted. So Cook’s distance assesses the influence of individual points on the model as a whole. Points which have a value for Cook’s distance that is greater than 1 are problematic (Field, Miles & Field 2012:269).
Leverage is also a measure that provides an estimate of how much a data point influences the accuracy of the model. Leverage values lie between 0 (no influence) to 1 (major influence: no good!).
To check if a given point is still acceptable, you need to calculate a cut-off point (either 3(k + 1)/n) or 2(k + 1)/n)).

We will now check, if we need to exclude data points and also calculate the standardized β.

Typically, the results of regression models are reported using a table like the one we just created (see again below).

However, you can also summarize the results of regression analyses in prose form which would be something like this:

A simple linear regression model was fitted to the data. Visual inspection of diagnostic plots and data driven methods did not suggest problems concerning outliers and model fit. The final linear regression model was based on 603 data points and correlated significantly with the data (R2: 0.0108, F-statistic (1, 601): 6.553, p-value: 0.0107*) and confirmed a significant positive correlation between the year the text was written in and the relative frequency of prepositions in the text (coefficient: .02, std. β: 0.1039, SE: 6.691e-03, t-value: 2.560, p-value: .0107 *).